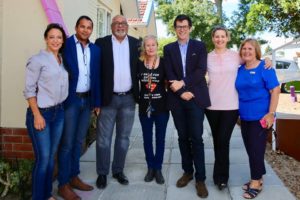 This week Iris House proudly opened their doors to a very special visitor. Mr. Edward Roman British Consul General based in Cape Town. Having experienced the difference made by the Children’s Hospice programs in the UK Mr. Roman recognises the important role respite care plays in the lives of children and parents of special needs children.  Mr. Roman spent time with each child and staff member at the hospice, showing great interest in the therapies offered including Imagination Station, Equine Therapy and the surfing program. Mr. Roman also spent some time with therapy horse Viltalgo and our trainer Alan Lockwood

Mr Roman will be assisting Iris House to connect Iris House more with the UK governing body. Together for Short Lives as well as British business operating in Cape Town and very generously has offered the Consul residence to host a fundraising event for Iris House (details to follow) 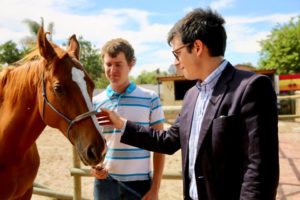 Shaun the sheep was on hand to greet Mr. Roman and decided to join in the tour of the hospice and grounds. Mr. Roman congratulated the Iris House team on the work they did as well as their level of commitment to quality care. He was also extremely impressed that all the service is free. Founder and CEO Sue van der Linde who is also British born says she is “extremely proud of her team and the quality of care they provide” “Having the British Consul recognise us as a quality Children’s Hospice is a huge compliment” Sue also worked and trained in the UK at the prestigious Dorset Children’s Hospice Julia’s House.